Try the fantastic slot Dead or Alive by NetEnt! 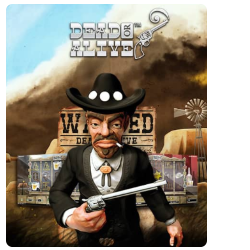 As haunting as it sounds, Dead Or Alive is one heck of a slot game you shouldn’t miss out on. And now it comes with a fantastic sequel!

If any period in North American history appeals to the civilians, it is the 19th century when the western part of the United States was discovered with world famous characters, including the likes of cowboys, villains, sheriffs and desperados. It was a time when the only law that existed was that of the Winchester or Colt.

Based on this theme is a classic slot Dead or Alive that has earned cult status, and is a masterpiece by Net Entertainment, purely based on the most creative outlaws of all time and offered by the best online casinos. This high variance game is certainly not for the faint hearted, as it is inspired by the drama of the Midwest Cowboy Era. The entire setup is in the Wild West US, and tells the story about the ones trying to outrun the law from the sheriffs. Help the sheriffs grab them by collar, and you’ll be rewarded with cash.

Overview of the slot game

The Dead Or Alive™ slot comprises of 5 reels and 9 paylines with exceptional graphics and typical western soundtrack, lonely dog barking, wind blows and whistling to make you feel like standing in the mid-west ready for a face-off. The slot is considered to be a classic one by the experts, given the potential it has to gain you huge wins, starting from just 9p per spin. 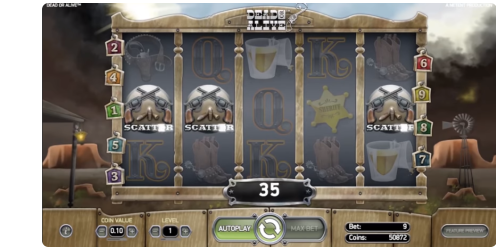 Just like most of the Net Entertainment slots, Dead or Alive also has a Free Spins option, which can be triggered by simultaneous appearance of three or more Gun symbols anywhere on the reels. As a result, you get twelve free spins with a 2x multiplier. Prior to playing, you are rewarded a cash prize, which depends upon the number of Gun Scatters you get to activate. This prize can range from 4 to 2500 times your wager.

Another interesting part of this feature is the Sticky Wild, in which the Wanted Poster becomes sticky wild. This implies that it remains in spot on the reels throughout the free spins. You get additional 5 free spins for one or more sticky wild symbols. In case you get three or more Gun Symbols on the reel, you can retrigger the feature. With a 2x multiplier, you can get as much as 29 free spins, if you are lucky enough. You can win some really good amount, if you merge that with sticky wilds. 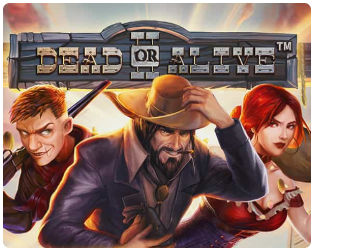 Now this game has a sequel. Released on the 24th of April 2019, Dead or Alive 2™ still is a video slot with 5 reels and 9 paylines, and features Scatter symbols, Wild Substitutions and Sticky Wild symbols. The cowboy theme is untouched. The atmosphere is very similar to that of its predecessor, but the game also offers exciting upgrades and thrilling new elements, like the 3 Free Spins game features: Old Saloon, High Noon Saloon and Train Heist.

In the Old Saloon, all wins are multiplied by 2. When one or more Sticky Wild symbols appear on each of the reels, they award 5 extra Free Spins. If 2 Wild symbols show on the same reel, they become Multiplier Wilds.

In the High Noon too Wild symbols are transformed into Multiplier Wilds.

In the Train Heist, there is a Multiplier that increases by 1, together with the number of Free Spins, any time a Wild symbol appears anywhere on the reels. If it reaches a value of x16, you will be rewarded with 5 additional Free Spins.

If not enough, one of the more interesting facts of this new version of Dead or Alive is that you can possibly win over 100,000 times your bet.